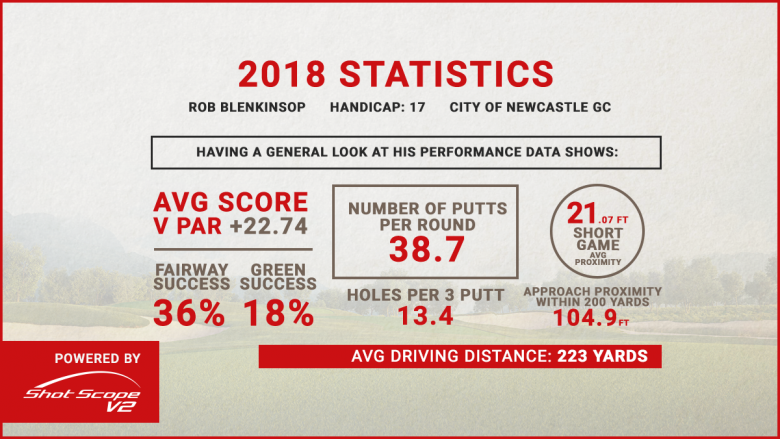 One area of Rob’s game which jumps out significantly is his average proximity to the hole within 210yards; 104.9ft (35yards). If Rob could hit his approaches closer he would most likely reduce the number of shots it takes him to play the hole.

Rob’s fairway success rate is low, at 36%. As we already outlined, Rob hits more greens when he is on the fairway. Therefore, if Rob can hit more fairways a round he should subsequently hit more greens, which with also improve his proximity to the hole. Further investigation into Rob’s tee shots highlights that Rob only hits driver off the tee, this may be because he doesn’t hit the ball that far. However over the 25 rounds analysed, Rob has incurred 31 penalty shots, (15 of those because of his driver) as well as numerous positional shots to get back in play. Rob should work on keeping his driver in play, or on the shorter holes, hit an alternative club off the tee.

The total score breakdown also indicates that hitting the fairway saves Rob shots. Rob makes double or worse 45.7% of the time when in the left rough and 49.5% of the time when in the right rough. Compared to the 28.1% when he hits the fairway. It can also be noted that the most birdies have happened when Rob has hit the fairway off the tee. Therefore, Rob’s main focus on course should be on hitting the fairway off the tee. This could require a slight change in technique, more practice with the driver or a different thought process when standing on the tee.

This will contribute to why his greens in regulation is so low at only 18%. Green success rate looks at the success of all approaches aiming to hit the green (i.e. not a positional shot). Analysing the green success rate in further detail outlines that Rob hits 23% of greens from the fairway and only 13% of greens from the rough. Although both stats are low, it might be that Rob cannot reach some of the par 4s in two or is having to play positional shots instead – not unusual for a mid handicap. Nonetheless, Rob manages to hit 10% more greens from the fairway than the rough, which is a significant amount.

Although Rob has 38.7 putts per round his make % is very good from short and medium length putts. The trouble being he rarely hits it inside that distance with his approach onto the green. He is frequently in the long range bracket (18ft+) and his stats from that distance are what lets him down. With his first putt he averages 7ft from the hole, if he can get that first putt closer there is more chance of him two putting from the long distance. He also averages a three putt every 13 holes, better lag putting or hitting the ball closer with his approach should help to reduce the number of putts per round.

OUTCOME: Aim to hit more fairways, which will reduce the number of penalty shots taken, which should then lead to more greens hit. Then hopefully Rob will build confidence and will start to hit them closer to the pin. Ultimately all of this combined will lead to a reduction in Rob’s overall score.