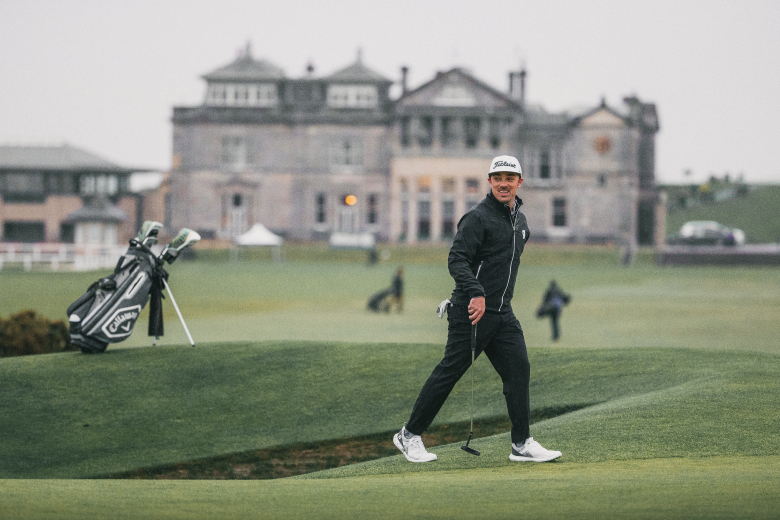 Golf’s oldest major championship is back once again, as the inaugural three-ball including Lawrie, Simpson and Woo Lee teed off early yesterday morning. After a brief pandemic induced hiatus, the legendary St Andrew’s Old Course welcomes the Open for the first time in 7 years – marking the 150th time golfers will vie for the Claret Jug. As a venue steeped in history and tradition, fans will be eager to see how their favourite pros navigate the many challenges which St Andrews has in store.

However, it can often be hard to fully appreciate the true difficulty and complexity of this prestigious venue from merely watching television coverage of the pros. But now, thanks to Shot Scope’s insightful The Ultimate guide to St Andrew’s E-Book, you can discover how tricky the average amateur golfer really finds the course.

The comprehensive guide to the home of golf, has been created using Shot Scope’s database of over 100,000 amateur golfers from 162 countries across the globe. Collected by the users of products including the V3 GPS watch, PRO LX+ Rangefinder and H4 Handheld, the data reveals where the average amateur struggles around the Old Course – including how you can learn from their mistakes!

The following article highlights some of the key takeaways from the E-book and provides 5 useful tips for those looking to play the course as deftly as the likes of McIlroy and Scheffler.

1.) It’s not as easy as the professionals make it look…

According to 6780 rounds and over 564,000 shots played at St Andrews with Shot Scope’s tracking products, the Old Course is far from a piece of cake for the average golfer. Despite an increasingly vocal group who claim that St Andrews is no longer challenging enough for the current crop of PGA Tour Pros, the data from Shot Scope illustrates that the Grand Old Lady is still more than a worthy adversary for any amateur golfer. With an average score of 83.2 overall, and wayward tee shots resulting in a hole average of 7 for the 17th and 18th, it is clear to see that the course still proves to be a daunting prospect to most amateurs.

Contrary to popular belief, the stats show that not all the infamous bunkers on the Old Course are scorecard destroyers. For example, the Road Hole bunker turned out to actually be the better miss for amateurs when compared to those who found the road or path on the same hole.

That being said, not every bunker was as forgiving. On the 7th hole, the vast Shell bunker was the graveyard for many pars and even bogeys – as just 6% of amateurs managed to get up and down from this sandy trap, and over 48% ended up with a double bogey.

Keeping a cool head and practicing good bunker technique before tackling the famous links course should help to ensure that things don’t go south if you land in the sand. Ultimately though, you are better off trying to avoid the bunkers entirely. An easy way to help you do this, is to incorporate a GPS watch such as Shot Scope’s V3 into your game. This handy tool provides accurate yardages to every bunker and hazard on the course – helping you choose the right club to evade them.

3.) Putting is paramount to success.

As St Andrews is home to large, undulating greens, it should come as no surprise that putting well is crucial here, and this was reflected in the numbers. The dreaded 3-putt was rife amongst the amateur dataset, which undoubtedly contributed to the far higher overall shot average than the pros. The 13th green – an enormous, shared green with the 5th hole – was statistically most likely to produce a 3-putt from the amateurs. If longer putts are one of your weaknesses, it is worthwhile hitting the practice putting greens and trying a few of these useful drills before heading out on the course.

4.) Learn where the best birdie opportunities are…

Although the Old Course offers a formidable challenge for the amateur golfer, it still has its fair share of birdie opportunities. Knowing the best places to sneak under par will help you capitalise on success – while knowing where you should play it safe is just as important to avoid disaster. According to the Shot Scope figures, some of your best bets for birdie are on the short 18th, and the straightforward 9th, with its flat green and lack of runoffs. Whereas the hazardous Road Hole is best played safe, as the vast majority of amateurs made a bogey or worse here. Also worth noting was the challenge which the 11th hole presents – with its sloping green and tricky bunkers, only a few amateurs were able to make a magic 2.

At St Andrews it’s best to pick your moment to go for glory carefully, otherwise you could end up turning that birdie into a double bogey.

One of the most pronounced areas where pros excel compared to amateurs is driving distance – as Shot Scope data discovered when comparing amateurs and PGA Tour Pros. Unfortunately for the amateurs playing the Old Course, this can mean at times a well struck tee shot fails to even make the fairway. As illustrated on the 7th hole where often the amateur golfer was unable to make the carry of 200-224 yards to the fairway. Obviously, this has a knock-on negative effect as they are forced to hit their second shot from a poor lie in the rough. Such errors were particularly prevalent among the 20 and above handicap range – who stand the most to gain from working on improving their distance off the tee.

Shot Scope’s new guide to St Andrew’s E-Book provides an analytical and comprehensive account of the pitfalls and opportunities which St Andrew’s Old Course has to offer. So, if this year’s Open coverage has inspired you to take on the challenge and walk in the footsteps of golfing giants, why not give the home of golf a try? Armed with all the handy tips and insights enclosed within this E-Book – as well as the invaluable data provided by Shot Scope’s award-winning rangefinder products – you stand every chance of success.