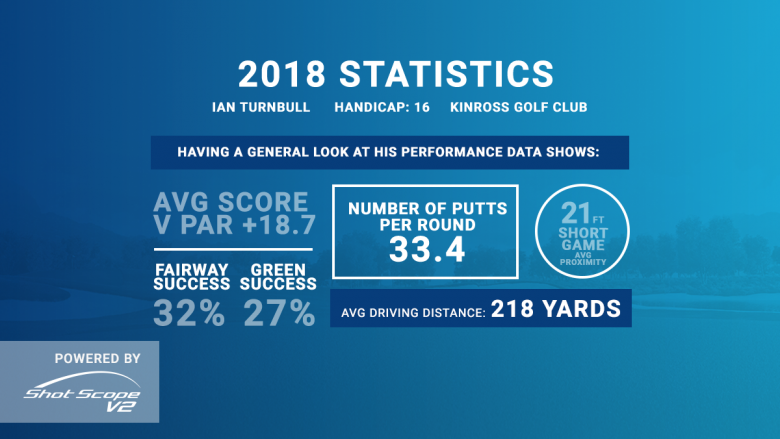 This data article is about Shot Scope user Ian, a 16 handicapper who doesn’t hit many greens and suffers from a poor short game proximity. Hitting greens, or if you can’t reach the green, chipping close is key to keeping your score down, or close to your handicap.

Ian struggles with a slice, which is highlighted by his high percentage of right misses 57%, but has also been confirmed by him. Even his drives on the fairway favour the right side as can be seen in the image below.

He loses distance due to his slice and subsequently, struggles to reach some of the longer Par 4s in two or three shots. The image above shows, Ian’s tee shots that hit the fairway go further than the ones that are in the right rough. A slice is something he will always play with, as he doesn’t have the time to change. Ian could change his aim point to help reduce the damage of his slice. If he aims further left, and still slices it, the shots will finish on the fairway more often.

However, what could help him lower his score, is if he focused his efforts on chipping and putting, with greater emphasis on chipping. On his best day, Ian got ‘up and down’ 48% of the time, to shoot a round of 83 – this is a very rare occurrence, as highlighted by his season average of 12%.

For Ian to get ‘up and down’ and reduce his score, he needs to be chipping inside 6ft more frequently. Ian’s putting stats show; he makes 78% of 6ft or less putts, whereas he only converts 8% of putts from 18-24ft. Therefore focussing on chipping inside the 6ft circle will ultimately lead to fewer shots per round.

Ian’s short game statistics show, he uses his 7 iron most frequently. This high percentage shows he is comfortable with this club, but it limits the type of shots he could play. For example, when short sided behind a bunker, a high lofted wedge shot is more appropriate. Ian’s statistics drop even lower when he uses his lob wedge around the green, as seen in the image below.

So how does Ian reduce his overall proximity? When it comes to short game there are many variants on shot type and club choice. Keep it simple and stick to what works best but have the ability to use the other clubs as required.

A simple suggestion for Ian is to get to the course 20mins earlier than usual (as this is all the practice time he has) and just spend some time chipping onto the practice green, with both his 7 iron and lob wedge. This will not only improve his skill level but will greatly enhance Ian’s confidence knowing that if he misses the green he has a greater chance of getting it inside that vital ‘red zone’.

If Ian can hit that 15ft average proximity target he is much more likely to start playing to his 16 handicap again. If he can reduce it further to 10ft, he may even start to shoot lower than his handicap!