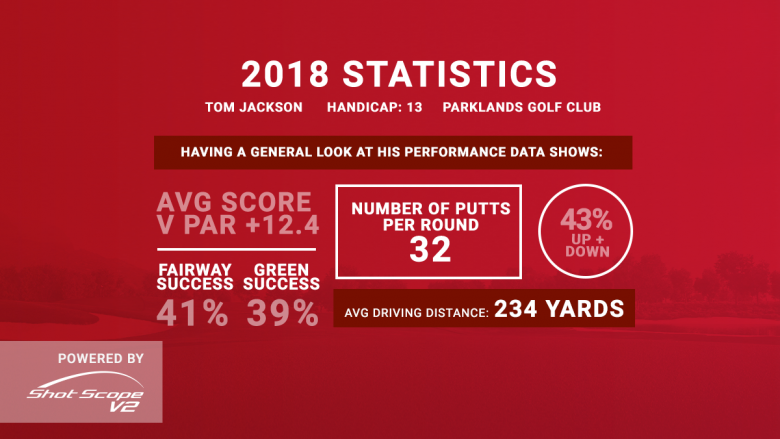 Tom is a 13 handicap golfer who has a well-rounded game, his 2018 overall statistics show that he is a steady player. Tom approached Shot Scope and asked us to investigate his stats as he was struggling to pinpoint where his weaknesses were.

Looking at Tom’s statistics we can see that he has good distance gapping with his clubs. Shot Scope’s Performance Average removes all outlier shots (good and bad) to give the golfer a true representation of the distance a well struck golf shot travels. The 30 yard gap between Tom’s average of 234 and performance average of 264 suggests that he struggles with swing consistency with his Driver.

Tom has a Green Success rate of 39% and leaves 72.5% of approaches short of the pin, with 50.6% of these completely short of the green. Rather than this being a complicated fix, the data suggests that Tom simply needs to pick his club more carefully.

Perhaps this means taking one more club than normal, to hit the green, or to ensure he gets it to the pin. Focussing on the back of the green distance would ensure that Tom selects the appropriate club and leaves fewer shots short of the green. In this example, if Tom was to hit a 9 iron, i.e. to the middle of the green yardage, his average and performance average show that he would end up in the danger zone at the front of the green. This is why Tom should hit one more club, his 8 iron.

Shot Scope data reveals that 72% of danger is at the front of the green whereas only 28% at the back. Therefore, missing long is 99% of the time, less of a problem than missing short. Tom, gets ‘Up & Down’ 43% of the time, which is very steady for a 13 handicapper, considering the best PGA Tour players get ‘Up & Down’ 70% of the time.

Chipping is one of Tom’s strengths, his average proximity from his short game is 14ft, but Tom is reliant on this to keep his score down. If Tom was to start hitting the correct club for his distance to the back of the green, he would start hitting more greens and wouldn’t have to try and get ‘Up & Down’ as often.

Tom needs to hit more greens from the fairway, so he is not reliant on his short game and become a more rounded golfer overall. Tom has committed to playing to the back of green distance, to try and increase the number of greens hit per round.

Tom has informed us he has a new Driver (Taylormade M3 with Twist Face Technology, 10.5 degree, Fujikura Atmos shaft) to try and sort out his distance inconsistency. After playing 8 rounds his Average Driving Distance is now 251 yards and Performance Average is 268 yards.