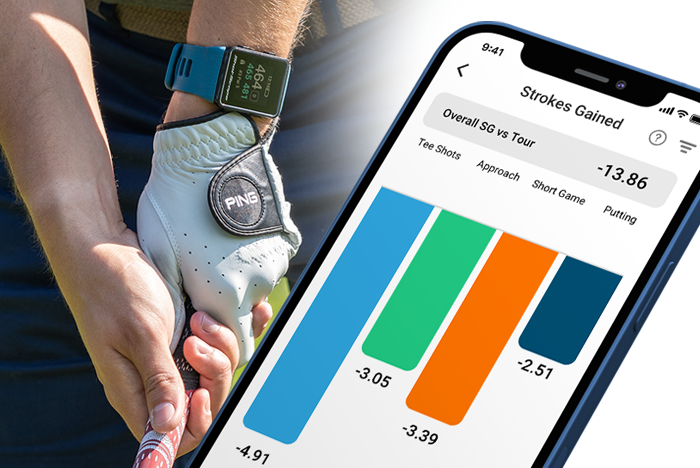 Understanding Strokes Gained: How it works

Strokes gained is a term being used more and more frequently within the golf industry. This article aims to help you understand strokes gained statistics and outline how you can use them to identify strengths, weaknesses and ultimately, improve your game. To find out what strokes gained is, check out this article.

Why use Strokes Gained?

When analysing golf performance, statistics allow for unbiased facts about a golfer’s game to be generated. Often stats such as Fairways in Regulation, Greens in Regulation and Putts per Round are used and while these stats are a great starting point (if you aren’t collecting these about your game, we highly recommend you start), they are somewhat restrictive in their analysis. For example; a golfer could miss a fairway by 1 yard, hit it in the water or out of bounds, all of these scenarios would simply go down as a missed fairway. When in reality, certain shots are more costly to the golfer, and a marginal fairway miss is not one of those.

The traditional golf statistics are a good base to start from, and can highlight many strengths and weaknesses in a golfer’s game, however if you are looking to dive deeper into areas for improvement, strokes gained offers that in greater detail.

With strokes gained, both accuracy and length are taken into consideration, to ensure that each shot has its own unique value. What this means is that a tee shot which lands on the fairway will give you a Fairway in Regulation, but if the shot is still 200 yards away from the hole, do you really know if it had a positive or negative impact on your score on that hole? Would it have been more beneficial to hit Driver, and perhaps end up in the rough but only have 80 yards to the hole? Without strokes gained, understanding the outcome of these shots, and which scenario is more beneficial, would be unknown.

Strokes gained is worked out by knowing the average number of shots players take to finish the hole from any position on the golf course. Baseline strokes gained numbers have been generated based off Tour players and their performance, and these are used to calculate strokes gained for any future shots.

To calculate the strokes gained for any shot, there is an equation.

The equation uses the start and end position of the shot to work out a value. Once it has that value, you need to take off the shot that has just been hit, hence the (-1) at the end of the equation.

This equation is used for all shot calculations, whether it is tee shots, approaches, short game or putting. Any shot hit on the golf course is applied to this formula to give it a strokes gained value. Typically these numbers are positive (strokes gained) or negative (strokes lost).

How do different types of shots affect strokes gained data?

Every shot has its own unique strokes gained value which is determined by, distance, accuracy and location/lie type on the golf course. To see how 2 different tee shots impact strokes gained on a hole which is the same length, we have outlined an example below.

If you have not come across strokes gained before, these numbers may seem very small and perhaps insignificant. However, this is only for one shot during an entire round. If you think about it, you have on average 14/15 Par 4 and Par 5 tee shots per 18 holes… Then all of a sudden the number becomes a lot more significant.

Also take into account that this is only an example of a tee shot. If we take a look at a full hole example, you can see how when combined together, certain holes can become an area of improvement for the golfer or are highlighted as a strength.

In this example, the golfer was worse than the baseline on every shot, apart from on the last 5ft putt, where they gained +0.23 shots on the average. Overall though, this hole resulted in -0.92 shots gained, or in other words it cost the golfer a total of 0.92 shots compared to the baseline.

If you are looking to improve your game, strokes gained allows you to dive into so much detail about where the room for improvement is. For example, this golfer below played the hole very well, and had a positive strokes gained for the hole.

However, breaking this hole down shot by shot, it is clear to see that their first putt severely let them down. This is where a putts per round statistics would simply show that this 2 putt contributed to 32 putts per round, without allowing the golfer (or coach) to see where the weakness lies.

How does a full round strokes gained data get calculated?

To calculate a full round of strokes gained data, each shot is simply added together to give an overall value for the round. This is more commonly broken down into the 4 key areas of golf; Tee Shots, Approaches, Short Game and Putting.

In Shot Scope strokes gained analytics each shot is placed within one of the 4 key areas of golf.

In the Shot Scope strokes gained analytics, all of the above data is referenced against Tour players. With the 3 Phase approach to the strokes gained release, Shot Scope will expand on the initial offering, going into greater detail with each statistic, before bringing in handicap benchmarking. To find out more about the 3 key phases, check out this article.

When the handicap benchmarking is released, the baseline statistics used will not come from the Tour, but will be generated from all existing shots within the Shot Scope database (80+ million). This will provide the strokes gained value (shots to finish) for every handicap of golfer, for every shot distance and lie type.

For example, using the same table from earlier but adding in 10 and 20 handicap baseline shots to finish (THIS IS AN EXAMPLE ONLY AND NUMBERS MAY NOT BE CORRECT).

Using Player B as an example, indicates that a drive of approx. 320 yards that results in being 60 yards from the green, but in the rough gains the player nearly half a shot compared to other 20 handicap golfers. This would mean that distance off the tee is a real strength for the golfer and they should seek to use it to their advantage when playing.

*Numbers are for example purposes only*

Offering this type of information to Shot Scope users is invaluable to their journey to improvement. This type of data not only allows for comparisons to be made against players of similar handicaps or ability, but also enables golfers to compare themselves against lower handicaps and identify the areas of their game they need to work on in order to improve.

While strokes gained may seem complicated, systems like Shot Scope, do all the hard work and equations for you. It has the capabilities to break down every shot during a round because as we all know, no two shots are the same. You can analyse strokes gained data in much greater detail than traditional golf statistics and it also enables weaknesses (that that you may not have identified the traditional way) to be recognised and subsequently improved upon. Strokes gained uses multiple factors in its workings, which make it one of, if not the best golf analytical tools in the golf industry.

Shot Scope are delighted to be able to provide their users with this comprehensive level of data and statistics on their game. The path to improvement all starts with knowing your game, and strokes gained helps you figure that out.